The Murder of the Day Family

Richard Fielding poured petrol through the letterbox of their Chingford home, set fire to that petrol and four generations of the Day family were incinerated.

Fielding believed that Lee Day was 'out to get him' and had conspired to prevent him becoming:

Thus far Fielding has not shown any remorse for his crime. Indeed, Detective Chief Inspector Ship, who was in charge of the investigation, said:

"He is now infamous as opposed to famous and there is some evidence he is enjoying that notoriety".


In court, the jury heard how, on 6 March, after he had argued with his mother over beer money, Fielding cycled to a petrol station and bought five litres of petrol. When a customer asked him if he had broken down he replied


He then cycled to the Day's property and committed mass murder.

When fire-fighters finally entered the property they found the bodies of Lee and Sandra Day wrapped, protectively, around the three children.

After his arrest Fielding boasted:

"You will not prove murder, I will get off with arson or criminal damage".


In other interviews, he said:

"I am not going down for murder, it is manslaughter, offer me that and I'll take it... It was like a game of knock down ginger, with a bit more ginger".


Fielding complained his imprisonment meant he would miss his holiday to Kenya from which he claimed he would have returned 'a walking sex machine and a DJ.' He even blamed his mother saying:

"Maybe if she had given me the money it would never have happened".

"The court heard that Fielding, a 'sexually confused' loner, was a hyperactive child, so disruptive at school he was expelled at 12".

Sounds like the kind of kid that Miss used to spend all her time fussing over and coddling. The Telegraph continued:

"He claimed to have started sniffing glue at nine and later abused a variety of drugs including LSD. He has convictions for indecently assaulting a male, theft and assault.

He believed people were laughing at him behind his back and kept an iron bar, an axe and a hammer by his bed and a ceremonial sword by the stairs because, he told his mother, people wanted to kill him. He told doctors he went to pubs and took drugs until he 'felt paranoid and more of a woman'.

Doctors said his psychosis was characterised by his inability to accept the consequences of his actions, his lack of concern and warmth for others and his manipulative manner. He showed no remorse. Fielding was preoccupied with the fit of his shirt and the colour of his socks because of publicity surrounding the case. He was 'grossly out of touch with reality'."

Defending Fielding, Kuldip Singh said he was so ill he could not be held responsible for his actions.

Unfortunately for the rest of us, the prosecution agreed with Kuldip's summary of his client's state of mind and waived the murder charges, accepting the lesser charge of manslaughter on the grounds of diminished responsibility. Fielding was, subsequently, sentenced to serve an indefinite period in Rampton.

Which means he will be out as soon as some bleeding-heart psychiatrist says he's sane enough to live alongside the rest of us.

Here's a photo of a family 'manslaughtered' into their graves by loony-tune you've never heard of: 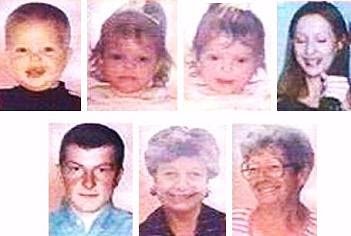